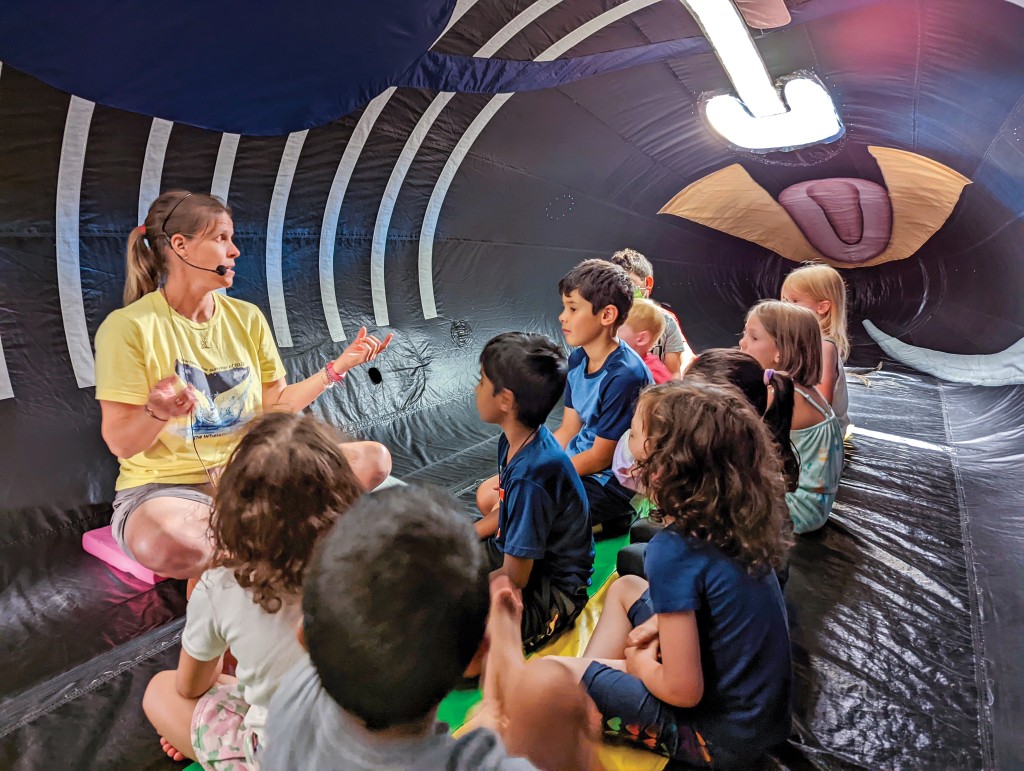 When’s the last time you visited a public library?  If you’re book lovers like most of us here at Rhode Island Monthly, then your last visit may have been just a few days ago. (If overdue fines were involved, well, no worries — we don’t judge.) But if you’re like most folks, it’s likely been a while.

Throughout the digital age libraries have adapted and grown with the times, in many cases serving as de facto community centers instead of just the book-lending institutions of yore. Most branches now offer audio and electronic books, movies via streaming services, museum passes, music and more. Many also have a library of things, where you can check out cool gadgets like video game systems, metal detectors, musical instruments, telescopes and Cricut machines.

There are discounted passes that can save you tons of money at local museums and attractions, maker spaces, book clubs and 3-D printers. You can learn a new language, search for a job, browse the internet and print out documents. In short, today’s libraries offer up a smorgasbord of services, with the lucky public ready to sample the tasty literary feast.

There are seventy-one public libraries in the Library of Rhode Island system (not including academic, school and special libraries), each with creative offerings. We’ve chosen five we think have a great combination of books, goodies, programs, quiet spaces and outdoor spots to explore.

But nothing’s stopping you from visiting them all. Every branch is listed on the state’s website: olis.ri.gov. Go take a bookish road trip and see what goodies you can discover at your local library.

A note: Some library hours and programs change with the seasons; make sure to call or visit a library’s website for the most up-to-date information. 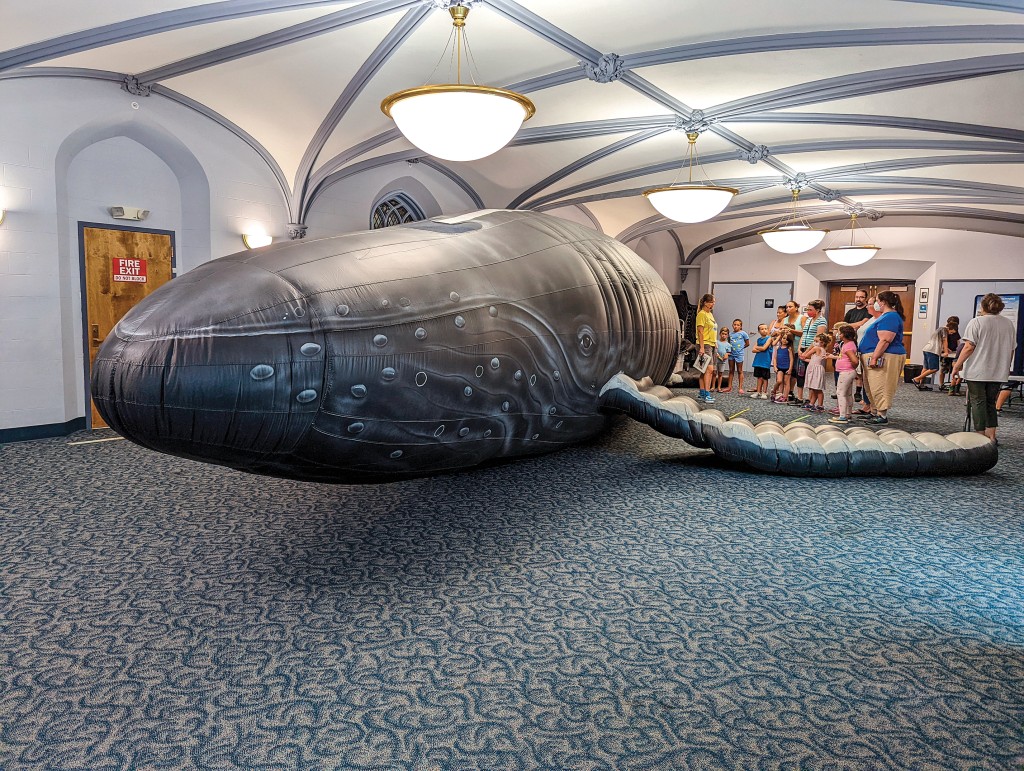 Tucked away into the leafy enclave of the town’s Monastery property, the Cumberland Public Library is housed in what remains of a Trappist monk monastery first constructed in 1902. Scenic walking trails, Nine Men’s Misery — a stone memorial to nine Colonists killed during King Philip’s War — and a playground round out the bucolic atmosphere. Inside the gothic structure, you’ll find a break from history: The library recently switched from the Dewey Decimal System to a method that mimics the bookstore browsing experience (not everyone’s a fan … but we’re getting used to it, we promise!) and removed dusty reference books a few years back to make room for a cozy snack and puzzle nook. A robust teen center comes to life with video games and craft and manga book club meetings, while downstairs in the colorful children’s section, favorite book series and topics are categorized into bins (think Maurice Sendak and Peppa Pig) and chicks from Saunderstown’s Casey Farm hatch every April in a nesting box.

“We’re a little more like a community center,” says Liz Gotauco, the library’s children’s services coordinator. “We’re really lucky — we have a really big library that the community loves and supports.” 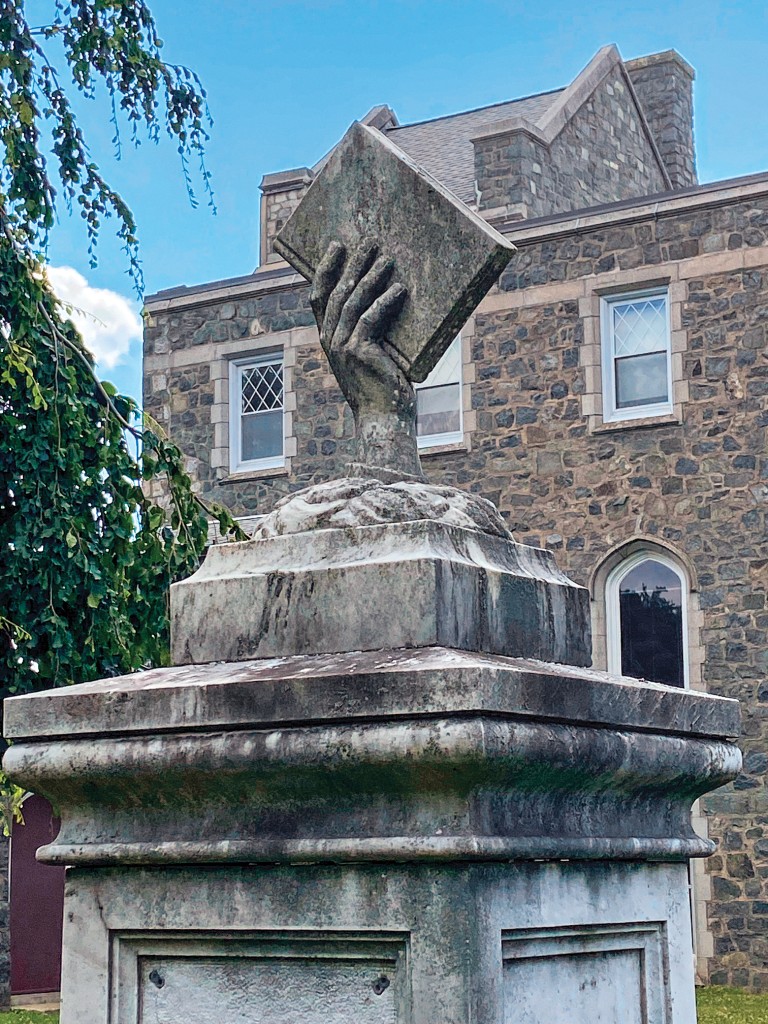 The main branch of the Providence Public Library, on Empire Street, recently reopened in 2020 after a $26 million renovation of its circa-1900 structure and 1954 addition. The results are spectacular — a mixture of turn-of-the-century architecture and sleek spaces greets book lovers, along with new features like a three-story atrium, tech labs, a teen loft, gleaming exhibition space and a renovated auditorium. Free tours of the new space are held Wednesdays at 11 a.m.; visit provlib.org/calendar to reserve a spot. The library has a robust educational component, holding everything from coding classes for teens, ESL and workforce training for adults, and STEM, music and art classes for the littles. The library also houses a wide-ranging Rhode Island Collection, an online archive of the Providence Journal from 1981-on and several historical photograph collections. You can even rent those pesky things you only need once in a while, like drills, tape measures, bike pumps and even tennis rackets, thanks to a partnership with the Providence Library of Things.

September is national Library Card Sign-Up Month. Head to your local library or visit oslri.org/application to fill out a digital application. Anyone who lives in or pays property taxes in Rhode Island is eligible to receive a library card.

Some unexpected gadgets and gizmos you can borrow from your local library. 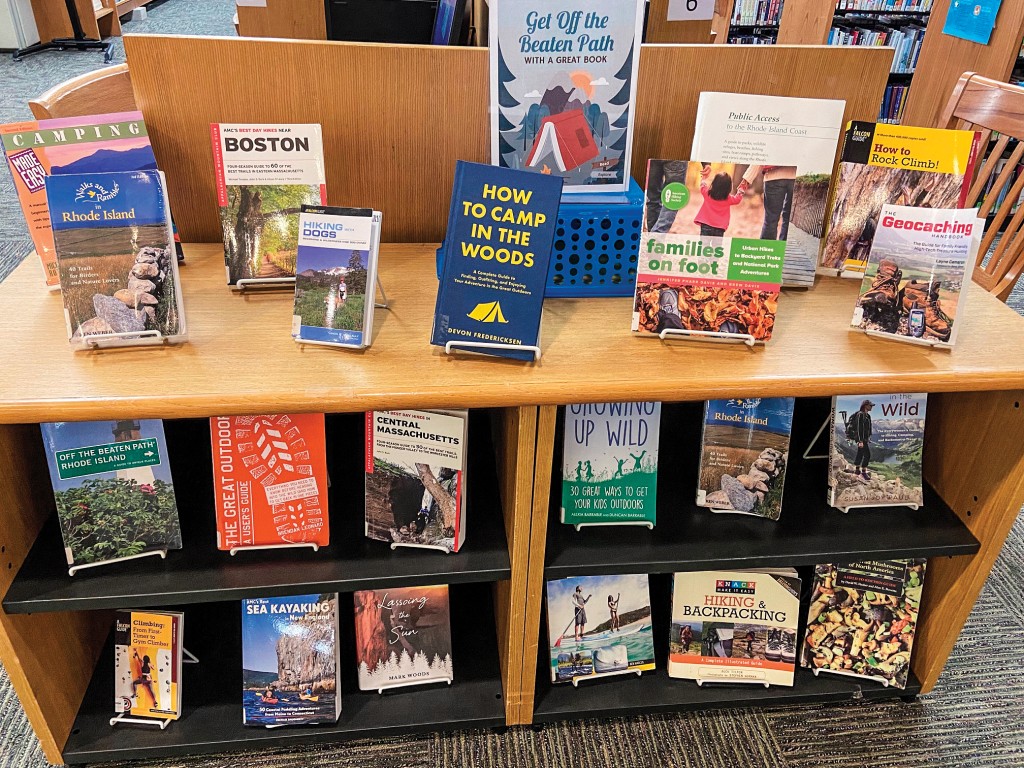 This branch is home to perhaps the coolest thing (in our humble opinion) one can check out of an Ocean State library: a ghost-hunting kit complete with an EMF meter, motion sensor, thermometer and geophone to record all the spooky things.

(If you haven’t seen it, make sure to watch the “commercial” for the kit on the library’s YouTube channel. You won’t be disappointed.)

The library’s Assistant Director Lauren Walker checked it out with a group of teens at an after-hours ghost-hunting event at the library. They broke into two teams, dimmed the lights, turned on the equipment and … the EMF meter lit up every time they moved near the DVDs. The teens were convinced it was a ghost.

If you’ve ever been intrigued by the idea of book subscription boxes but not the cost, the library offers a much-cheaper solution with its bookworm boxes. (“We’re trying to get people to stop spending their

“We have a lot more than books,” says Library Director Megan Weeden. Once you’re done checking out some binge-worthy fare and the ghost-hunting kit (of course!), relax with a scenic stroll on the Coventry Greenway, which runs just behind the library. 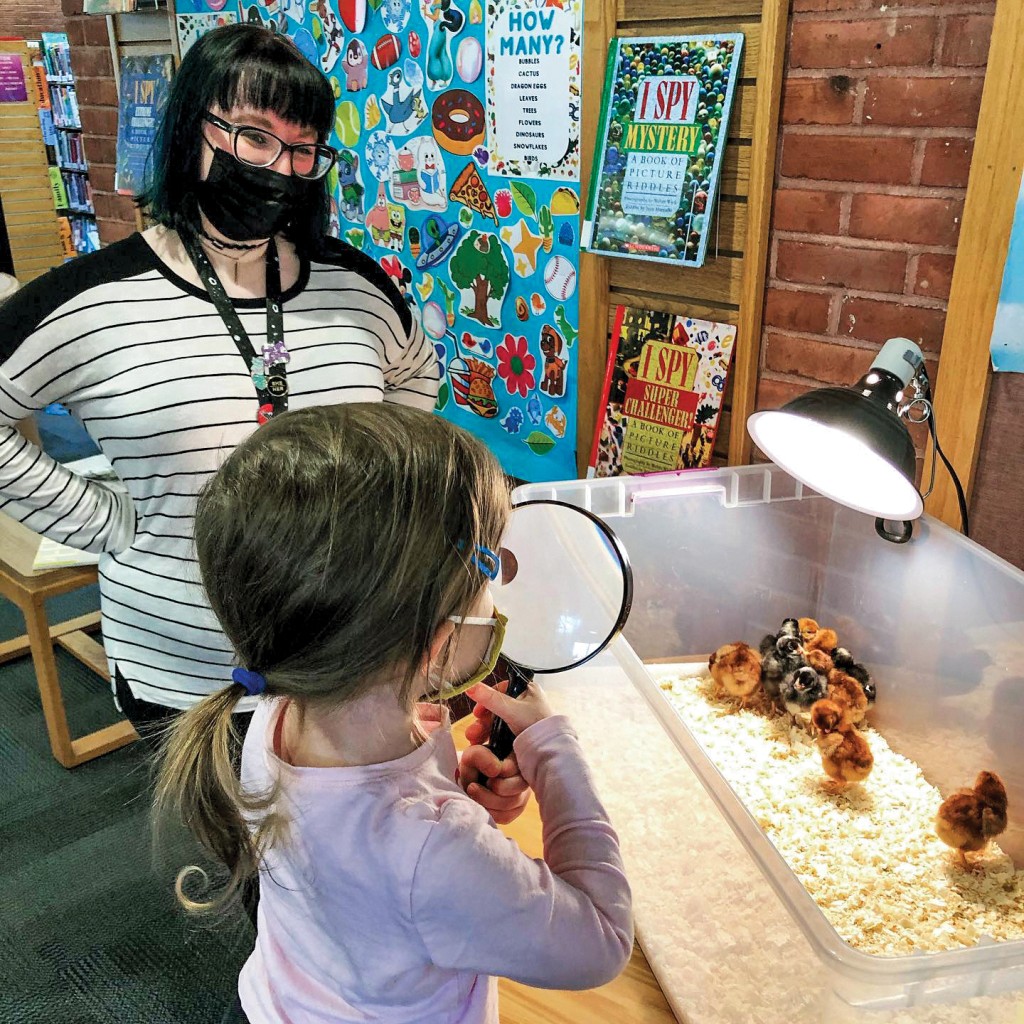 For the second year in a row, the West Warwick Public Library is a finalist for the National Medal for Museum and Library Service, a prestigious award given to museums and libraries that show excellence in serving their communities.

“We aim to respond to the community’s needs and wants,” says Library Director Colin McCollough. “We evolve as the community evolves.”

During the pandemic, that meant bringing public programs online, which McCollough thought at first would be a loss. But then he saw a serviceman in Central America taking part in one of the library’s virtual gaming events, and children from Oklahoma sitting in on story times, and marveled at how virtual events actually brought far-flung folks together.

The pandemic also helped staffers curate their library of things; after seeing the toll the pandemic took on people’s mental health, they used American Rescue Plan Act funds to purchase meditation kits for adults, teens and kids, a sleep sound machine and a yoga set. After seeing members of the community struggle with food insecurity, they set up a care pantry stocked with food and personal care items.

The library also publishes anthologies, often from underrepresented voices. Its first volume, Voices of the Lost Year, featured stories written by teens during the pandemic. Another features tales from Indigenous authors, and one scheduled to be published in summer 2022 contains stories from LGBTQ writers.

The library made the news in June 2021, when its plans for a Drag Story Hour came under fire and McCollough refused to cancel it. The event, he said, celebrated the fact that people are different, and that being different shouldn’t be a reason for teasing or bullying.

“Our message is simple,” McCollough wrote at the time. “Libraries are for everyone.”

The event was “joyous” and “affirming,” McCollough says. For this year’s Pride Month, the library teamed up with other local organizations for West Warwick Pride, holding even more events and being there, once again, for the community it serves. 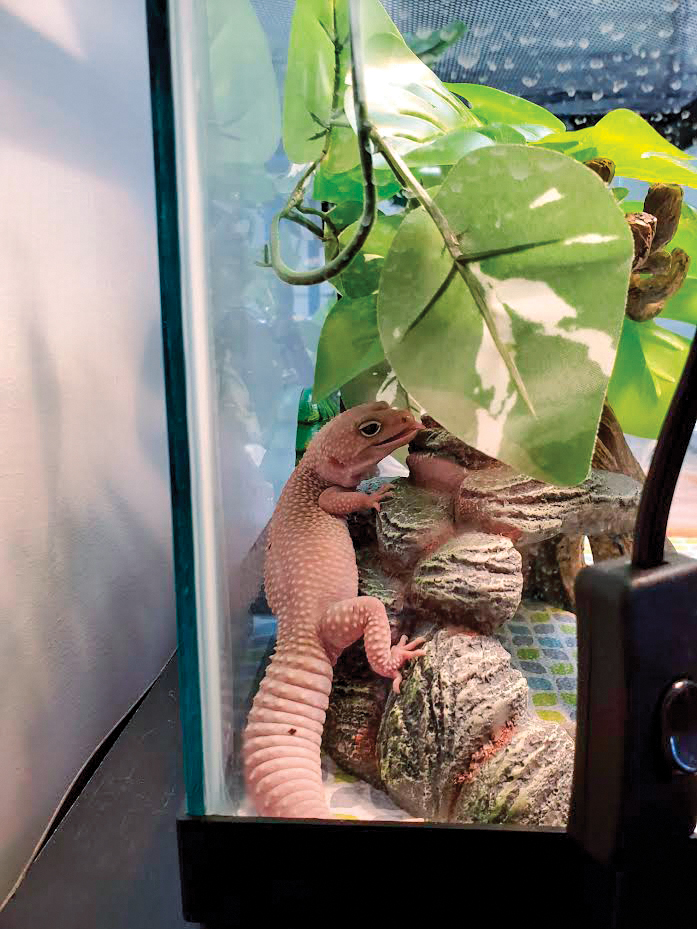 Just a smattering of reduced-cost museum and attraction passes you can find at local libraries. (Each library varies; visit a branch’s website to see its offerings.)

The Weaver Library traces its roots to 1871, when a “Ladies Social Union” of Susan Weaver, Eliza Pierce and Rhoda Bassett formed the first library in the city’s Watchemoket area. The current building dates to 1938 and is complemented by an expansive lawn and the iconic Weaver copper beech tree. Bibliophiles flock to the annual book sale held in April by the Friends of the Library, and all manner of book bundles based on topics and STEM kits will keep elementary-school-age kids entertained. The library’s Book Club in a Bag is great for sharing and discussing the latest tomes; each canvas bag comes packed with ten books, questions, review
and info about the author. Current titles include The Book Thief, For the Best by local author Vanessa Lillie and Where the Crawdads Sing. Feeling nostalgic? You can also browse East Providence High School yearbooks (go Townies!) from 1918 on, as well as flip through back copies of the East Providence Post going back to 1984.

Here’s a sampling of what local librarians are reading.

The Rise and Fall of the Dinosaurs: A New History of a Lost World  by Steve Brusatte — Colin McCullough, West Warwick Public Library