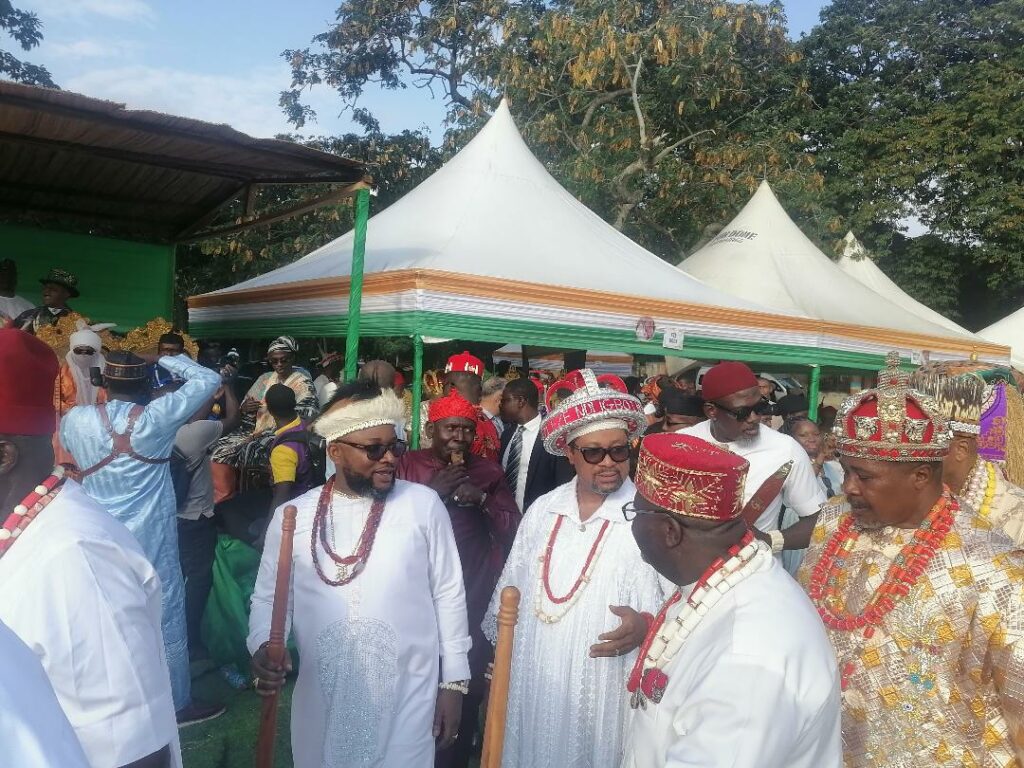 Eze Dr Chukwudi Ihenetu, the Paramount King of the Igbo Community in Ghana, has inspired hope for his subjects and other people as the Igbo community celebrated 10 years of the Igbo throne in Ghana, and the Igbo new yam festival, in Accra.

As the celebrants filled the air with joy with dance, music and firing of musketry, the Igbo King, attired in beautiful Igbo white robe, led royalty on a red carpet to a table, arranged with plump tubers of yam.

He then invoked divine blessing on the tubers, cut into the roasted ones and dipped a cut into a bowl of stew and later took a bite.

Eze Dr Ihenetu was enstooled as the Eze Igbo of the Ghanaian community on August 30, 2012.

The Efua Sutherland Children’s Park went agog with excitement as the King declared the opening of the eating of the new yam, with thanks to God Almighty for the 10-year success of the Igbo throne in Ghana, and for the success of Igbo agricultural and other activities, symbolised in the harvested yam.

The New Yam Festival, in the Ogidi community, of Anambra State in Nigeria is an important way of marking the beginning and end of the farming season and is a celebration of life, accomplishments in the community, culture and well-being.

The essence of the festival is to express gratitude to Almighty God for life, protection, and bountiful yam harvest.

The colourful occasion was a visual spectacle of coherence, dance, joy, and feasting for community members to mark the end of the cultivating season.

The festival, which attracted tourists and people from all occupations and 0 recognised by UNESCO, an arm of the United Nations, Ghana traditional institutions and Ghana Ministry of Tourism and Culture was on the theme “Ten Years of Promoting and Preserving Igbo Culture in the Diaspora.”

“As we mark the 10 anniversary of Ghana Igbo history, we are hopeful that our tomorrow will be better teeter that today. God bless you,” the Igbo Paramount King had earlier said.

Eze Dr Ihenetu said: “The New Yam Festival is time to thank God for His grace on our businesses, our health, and the resources to harvest our crops.

“So, today we are alive to harvest that which we have planted which is represented by yam.

“By thanking God at this time, we also plead for good health and the resources needed for the net farming season so that we can gather again next year to celebrate Thanksgiving.”

He repeatedly gave thanks to God, and invoked divine blessing for the new cropping season, good harvest, prosperity, and health as he advised that resources gathered should go into the care of one’s dependents, and especially care of the family, foremost in caring children and their education.

The Eze identified Africans as one people, who have been divided by artificial borders, and stressing unity among Africans and among people of African descent and those in the Diaspora, called in Africans too maintain, practice, and teach African culture.

Eze Dr Ihenetu recalled that the relationship between Ghana and Nigeria began many years began through then Public Works Department and the West African Frontier Forces ran by the then British West African Government.

‘And also, during the struggle for independence, people like the first president of Nigeria Dr Nnamdi Azikiwe lived in Ghana, where he passed through working as a journalist studying in the US

Eze Dr Ihenetu noted that establishing the Igbo throne in Ghana 10 years ago was met with challenges like the Ebola scare, but with tenacity “certain dates have become cemented as part of the communal narrative” that define the Igbo people in Ghana.

“These are days that, in diverse ways have made us display our culture and identity, to show who we are. Which is, why it is essential to learn about them and to learn from them.”

He reminded Igbo leaders and parents in the Diaspora, as a shared responsibility, to teach new generations the Igbo culture and traditions.

“We owe it to them to make them a better people, a wiser clan, and to create a better Nigerian –Igbos I in Ghana for those who come after us,” Eze Dr Ihenetu said

He expressed thanks to Government and People of Ghana for accommodating Igbos and giving Igbos the space to operate freely.

Aside the cutting celebration of the yam festival, cola was also blessed for the celebration.

Among the personalities that were recognized by the Igbo Paramount King, at the festival was Ghanaian gospel musician, Empress Gifty Osei, who was installed a chief

Empress Gifty, accompanied by husband Hopeson Adorye member of the ruling New Patriotic Party, to the event said she was the “eagle of the time” and expressed delight at the recognition, pledging to continually respect tradition and continue to use music to advance the progress of humanity.